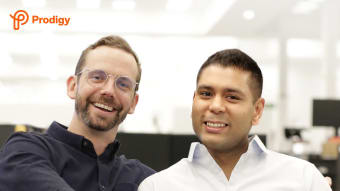 In 2011, Prodigy Education founders Alex Peters and Rohan Mahimker came to Innovate Niagara to explore the potential of an idea, which started as a fourth-year undergrad project.

Nearly 10 years later Prodigy, a curriculum-aligned math game for students in grades 1 through 8, has become one of the fastest-growing EdTech companies in North America with over 100 million users worldwide.

“Innovate Niagara was the first incubator we worked with and the team there helped us get some of the core elements of our idea down on paper,” said Peters.

“The team was amazing at helping us get the training we needed as first-time founders. They helped us find and prepare numerous grant applications so that we could get the resources we needed to build our company. We actually did our first value proposition training with Innovate Niagara and MaRS Discovery District, and that work helped us land our very first school!”

The District School Board of Niagara (DSBN) was one of the first school boards to take a chance on an early version of Prodigy.

“In 2020, we crossed over 100 million registered students on the Prodigy platform as more and more families and educators turned to our services to help keep students engaged and learning through the pandemic,” said Peters.

In response to this demand, Prodigy recently completed a fundraising round for CAD $159 million. This investment was led by TPG Growth with additional investment from the Canadian Business Growth Fund; it is one of the largest investments in North American EdTech history for any funding round.

With a strong presence in North America and recent expansion to India, Australia, and the United Kingdom, the investment will help Prodigy accelerate its market reach, bolster the advancement of its renowned math game, and further strengthen Prodigy Math Tutoring.

“We completed this fundraising round so that we could scale up and support students, parents, and educators even more effectively,” Peters explained. “I think we're going to see more and more technology being used in the classroom, built in a way that maximizes the impact an amazing teacher can have on their students, and a continued strengthening in the connection between home and school, which is incredibly important because parental involvement is a critical factor in student success.”

“We are proud to see one of the companies we helped get started  reach this level of growth and have such a profound impact on education around the world,” said Jeff Chesebrough, CEO for Innovate Niagara. “It is exciting to help innovative entrepreneurs like Alex and Rohan bring their ideas to life. We have the right people, resources and tools in place to help Niagara’s innovators succeed. It’s always exciting to be a part of what’s next as the world evolves.”

Prodigy’s growth hasn’t gone unnoticed. In 2020 alone, Prodigy was named one of Canada’s Top Growing Companies by Globe and Mail for the second year in a row, one of the 50 Most Transformational Growth Companies in Education Technology, one of the Top 100 EdTech Companies in North America by HolonIQ and ranked 318th on the Deloitte Fast 500 Awards list. The co-founders were also selected as part of Canada’s Top 40 Under 40 by BNN Bloomberg.

Prodigy recently moved to its new headquarters with over 90,000 sq. feet of space. The team is approximately 400 strong and still growing. The founders intend to add another 400 team members in 2021.